Racecourses In The UK

Horse racing in the United Kingdom is one of the most famous pastimes. The popularity of the sport has only grown over the past couple of years as more and more people are attending the biggest festivals throughout the season. However, there is more to the horse racing calendar than just the huge events, as meetings take place everyday around the country. 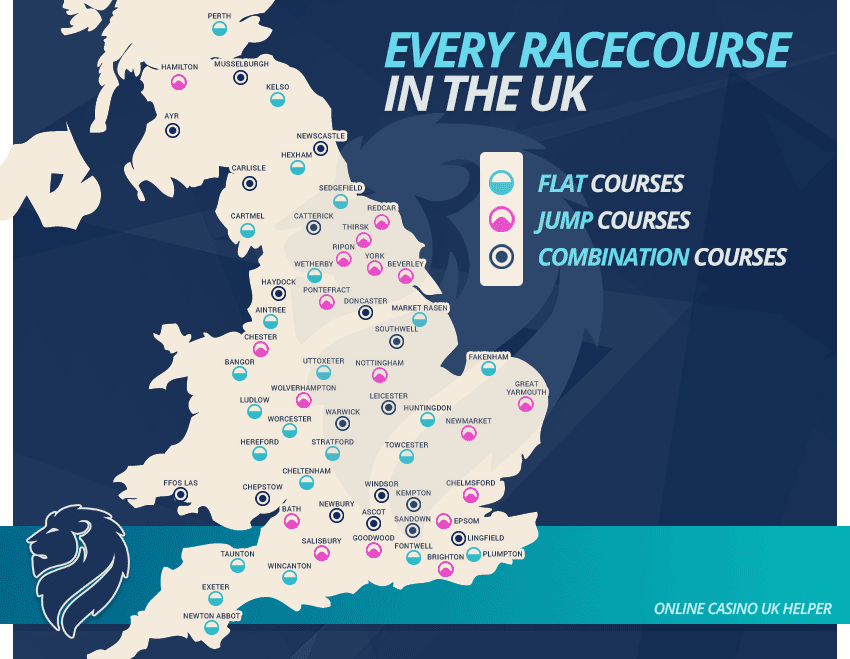 Flat racing is the most prestigious type of racing in the United Kingdom, and Ascot plays host to the biggest festival of the season over the flat. There are 13 out of the 36 Grade 1 races that take place here, with the Gold Cup, King George VI and Queen Elizabeth Stakes among them. The track also plays host to jumps racing.

One of the oldest tracks in the UK can be found in Yorkshire. Beverley Racecourse has been open since 1767, with a three day meeting taking place every year since the early 19th century. The biggest races to take place here are two-listed events. These races are called the Hilary Needler Trophy and the Beverley Bullet Sprint.

The racecourse at Brighton is one of the most popular to visit over the summer months due to it being close to the beach. There are no standout races to take place here throughout the season. The biggest meeting at Brighton takes place in August, as the three-day festival takes centre stage.

National Hunt racing has become extremely popular over the past 20 years, and the main reason for the excelled popularity is the Cheltenham Festival. It is the biggest event of the season for many, with the four-day festival being attending by a quarter of a million people every year. The Cheltenham Gold Cup is the biggest prize on offer, while there are also at least two Grade 1 events every day.

There aren’t many bigger races during the flat season than The Derby. Epsom Downs plays host to the prestigious event, which is open to horses aged three-year-olds and older. Members of the royal family; including the Queen, often attend the Derby. The event has been attended by 130,000 in the past, with the Epsom Downs area available to attend free of charge.

Hexham is an extremely popular course to visit, and is unique. The aspect that makes it special compared to all the other racecourses is the fact that it is 800 feet above sea level. The biggest race of the season to take place here is the Heart of All England Hunter Chase, which takes place in May.

Sandown Park has the correct mixture of racing and entertainment to keep novice fans entertained. There are five Grade One events through the jumps season, while there is a further one Group 1 race during the flat season. The biggest race of the season here is the Eclipse Stakes. Bands such as Madness, UB40 and Simply Red have all played here.

Sedgefield remains one of the most popular racecourses in the UK despite being nearly closed down on three separate occasions since 2000. There are typically 20 fixtures that take place here during the National Hunt season, with the most popular being the Durham National in October.

One of the most popular all-weather racecourses to visit can be found at Southwell. It is one of just six courses that offer this choice of terrain in the UK. There is also National Hunt action here throughout the season, but that takes place on the turf.

Wincanton is one of the most testing racecourses on the National Hunt circuit due to the sizes of the fences. There are a number of significant races to take place here, and they include the CGA Chase and Kingwell Hurdle. These races are typically important markers for the runners at the Cheltenham Festival.

Good Hotels & Where To Stay For The Biggest Meetings

DoubleTree By Hilton- This hotel has the best of both worlds, as it is centrally located and has an indoor pool and spa to unwind in after the racing.

Malmaison Liverpool- The Malmaison is one of the most modern hotels in the city. The slick design coupled with excellent staff makes it a must-stay for all visitors to the city.

Hard Days Night- If you’re a Beatles fan, then this is the only place to stay. It is more on the pricier side, but it offers contemporary style and a unique lounge bar.

Macdonald Berystede Hotel & Spa- This four-star hotel is one of the best in the local area. It is near to the racecourse, and also offers a range of spa experiences to unwind.

Royal Berkshire- If you’re looking for an elegant escape, then there is nowhere better than the Royal Berkshire. As a visitor, you will stay in a prestigious country mansion. It isn’t one of the cheapest options, but it’s one of the best.

Premier Inn Bagshot Hotel- Not all the hotels in the area are expensive, and the Premier Inn will represent a budget pick. Breakfast can be added on at an extra cost, and it is located near to the racecourse.

No.131- This sophisticated hotel is one of the most popular for visitors. There are elegant rooms and a free breakfast. Be sure to book a year in advance to avoid disappointment.

Hotel du Vin- The French-inspired hotel is a prominent pick for all visitors to Cheltenham. It is a four-star hotel with chic rooms and friendly staff.

Queens Hotel- This four-star hotel is within walking distance of the racecourse, and visitors can enjoy the complimentary wifi. The lounge bar makes it a prominent pick for those attending the festival.

✅ How Many Racecourses Are There In The UK?

In total, there are 59 racecourses in the United Kingdom.

✅ What Is The Busiest Racecourse In The UK?

The busiest racecourse is Cheltenham during the week of the festival. The meeting will be attended by nearly 70,000 people every day.

✅ What Is The Oldest Racecourse In The UK?

Chester is officially the oldest racecourse in the UK. The first registered race to take place here took back in 1539.

✅ Where Is The Ascot Racecourse In The UK?

Ascot hosts one of the biggest festivals of the year. It is located 25 miles away from London, and visitors can get to the course from the capital by train and coach.

Children are permitted into UK racecourses and whilst they will not be permitted to place a bet at the various on course bookmakers there will be planty of other things for them to do! In fact many UK racecourses are very family friendly venues and you will find many of them offer a play park and a range of other activities for the children to part take in as you are watching the races and placing your bets and wagers onto those races!

✅ Can I place a bet at a UK racecourse?

You will find that at every single UK racecourse there will be several on course bookmakers who will be offering you odds on ever single race running at that venue. Also you will find that a very large proportion of racecourses throughout Great Britain will also have a betting shop at those venues at which you will be able to place bets and wagers on any other racecourses holding a meeting that day.

✅ Which casino site also has a sportsbook/racebook?

If you are looking for a casino site that also operates a sportsbook or racebook at which you can make horse racing bets on (that is also fully licensed and regulated in the UK) then we can recommend the 888 Casino, this is a casino that uses a no download gaming platform and you will have access to lots of different games when play there. Have a look at our review of 888 Casino as we have a high valued welcome bonus to introduce to you which will allow you to boost the value of your initial deposit.