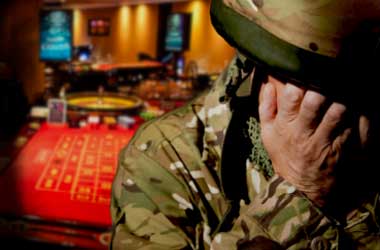 The UK government and the UK Gambling Commission are working hard to provide better protection to British gamblers and reduce the number of problem gamblers in the country. It is a difficult challenge as the overall gambling industry in the country continues to grow and so does the rate of problem gambling this is where GamStop comes in.

A new report published in the BMJ Military Health show that military veterans are 11x more likely to become problem gamblers than the average Brit. Researchers say that there is good reason now for UK Armed Forces veterans to be screened for problem gambling tendencies since problem gambling continues to be a public health concern in the country.

Problem gambling has a number of side effects which include players getting into debt, having problems with their relationships, losing their jobs, quitting their education and engaging in criminal activities. Problem gambling is estimated to cost the UK £1.27 billion each year.

Reports show that over 10 percent of UK military veterans leave the force and end up with financial difficulties. They are vulnerable as they could turn to online gambling and sports betting to see if they can make money from these avenues and end up getting into more financial difficulties. When discharged veterans go through routine mental health screening, they do not get checked for gambling related concerns.

Data was taken from the UK Armed Forces Veterans’ Health and Gambling Study where 1037 responses from military veterans were analysed. Most of the participants in this survey where between 30 to 39 years and the majority of them were men. All those who said they engaged in gambling such as sports betting, were asked to complete a Problem Gambling Severity Index (PGSI).

If you get 0 on the PGSI, it indicates no problem with gambling while a score of 8 or more indicates problem gambling tendencies. The results showed that when compared to the average Brit, military veterans were 11x more likely to end up with a problem gambling habit.

The survey and research was based only on observation and hence cannot establish cause for these actions. However, it did show that military veterans end up costing the government a lot more on healthcare, social care and overall societal costs than the average Brit. Healthcare costs associated with military veterans went up by £600 per person.